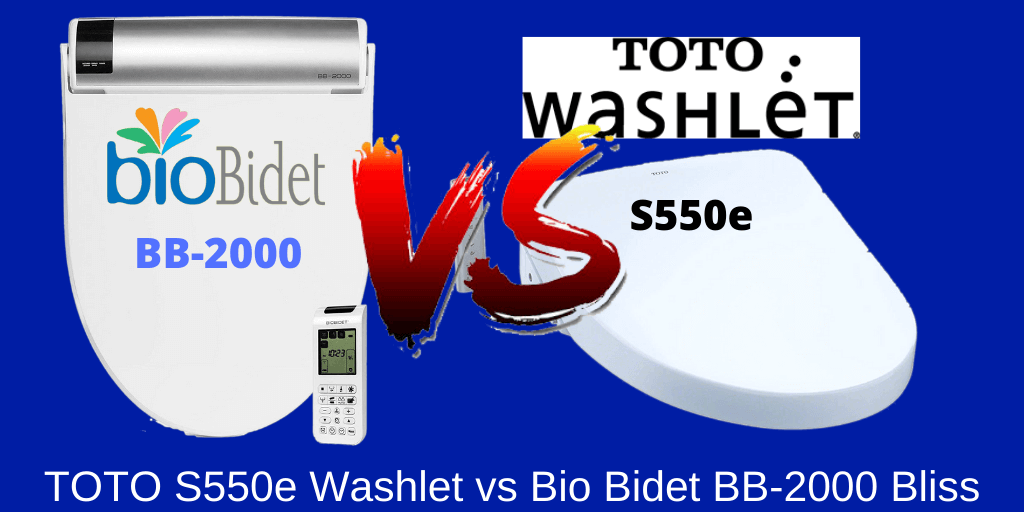 If you’ve narrowed your choices down to these two seats, you’ve done an excellent job in your research.

This product comparison article will show you some of the key similarities and differences to consider as you make your final decision between these two models.

Hi, Jack here and before we start getting right into this comparison my number one choice bidet toilet seat is Bio Bidet’s BB 2000.

I’ve been using it for a while now and I’m more than satisfied.

However, let’s see how this seat stands up against the Bliss bb 2000 in terms of features and functionality.

Let’s talk a little bit about the design and Aesthetics of these two seats.

The bio bidet BB Liss 2000 has a silver trim going across the rear of the unit whereas the Toto S550e is all white.

The Toto S550 e is physically a more compact bidet seat and gives a trimmer look since it measures just five inches tall at its tallest point in the rear.

This compared to the BB 2000 which measures closer to 6 inches tall.

So it’s a little taller when mounted on your toilet.

On the S550e both the water hose and electrical cord connect to the same side of the seat.

The water hose for the BB 2000 connects on the same side too, but note that the electrical cord connects on the opposite side, which is the right side as you’re facing the unit.

This allows you to customize Aesthetics bit more to better match the look of your bathroom.

Both the Bio Bidet BB 2000 and Toto S550e are high-end bidet toilet seats.

So they share a lot of common features you would expect in seats of this class.

Both seats have a water pulse mode and an oscillating wash feature, too.

Additional common features include a warm air dryer and a heated toilet seat.

Both models include a slow closing seat and lid which is a small but really nice thing to have.

They also both come equipped with an air deodorizer function and a built-in night light which comes in handy during your late-night visits to the bathroom.

Now, let’s highlight some of the differences between these two bidet seats.

One difference is in the width of the seat.

Another difference is in the wash nozzle itself.

The Toto washlet S550 e has an all-plastic nozzle with multiple spray ports the BB 2000, on the other hand, has a nozzle that is made predominantly of stainless steel.

Also, the bb 2000 has a removable nozzle tip, which can easily be swapped out.

This compared to around 0.5 liters per minute at the maximum setting for the Toto S550 e.

The Bio Bidet Bliss BB 2000 also has an optional enema feature which can be used to help relieve constipation. This enema feature has been classed as one of the best on the market for a bidet toilet seat in 2020.

This is also something the Toto washlet S550e doesn’t have.

The S550e does have adjustable spray width however this feature lets you choose from more concentrated narrow spray or a softer wider spray.

Another feature that S550 has which the BB 2000 doesn’t is the toilet bowl misting feature.

This feature gives a mist spray inside your toilet bowl with electrolyzed water before and after each use.

The Washlet S550e also has an automatic seat and lid. A sensor on the side of the seat detects when you are approaching and will lift the lid for you.

It will raise the seat by tapping the button on top of the remote control.

The Toto remote is double-sided with the most commonly used buttons on the front.

This is where you’ll find the various wash buttons as well as some adjustment controls. Towards the bottom, you’ll see icons for to user presets where you can pre-program water temperature, water pressure and other wash settings for up to two users in your household.

The LCD display for the Toto S550 e is on the back. This is where you can change temperature controls, program user presets and adjust other settings.

The wireless remote control for the Bio Bidet BB 2000 is single-sided with a large LCD display on the top half and the control buttons down below.

Icons on the LCD screen show which functions are in use and at which setting.

The remote for the BB 2000 also comes in your choice of two colors white or black.

You should also consider the warranty terms for these two products while making your final decision. The BB 2000 comes with a three-year warranty which fully covers the seat for three years.

As an additional charge, you can purchase an extended warranty plan which provides six years of total coverage.

Toto is definitely known to produce some of the most reliable bidet seats on the market.

Both the Bio Bliss BB 2000 and Toto S550e washlet are world-class bidet seats.

There’s also the adjustable spray width and the automatic opening seat. Lid is a lot more useful than most people realize.

The Bio Bidet bb 2000 comes with a stainless steel nozzle and the added enema function and is a feature some people find helpful.

The increased water volume is among the best that you’ll find in any bidet seat. The BB 2000 will be better suited for larger people with its wider seat and higher weight capacity.

And finally, some people may find peace of mind with bio bidets longer warranty period.

Choosing a suitable bidet seat relies on your individual preferences and goals.

However, I would personally recommend Bio Bidet bb-2000 as the number one bidet seat thanks to its versatile features and flexibility and pricing.

Thanks for reading this post and I hope you found this comparison helpful.